A Temporary Flight Restriction (TFR) is nothing to play around with. Violations of TFRs can be punished quite severely with a pilot license suspension, civil penalty, or in the worst case: prison time. The FAA has been pursuing enforcement actions against manned and unmanned pilots around the U.S. for TFR violations. In this series of TFR articles, I will help you understand more about each of the TFRs, and give you pro tips based upon my flight instructing experience, so you can pass a knowledge exam and fly safely and confidently.  Also, if you want to create a TFR, get a waiver to fly into a TFR (i.e., sport event filming), or if you accidentally flew in a TFR unauthorized and potentially will be prosecuted by the FAA, contact me.

What is a TFR?

The FAA defines a TFR as “a regulatory action issued via the U.S. Notice to Airmen (NOTAM) system to restrict certain aircraft from operating within a defined area, on a temporary basis, to protect persons or property in the air or on the ground.” There are different types of TFRs and they are listed out in the Federal Aviation Regulations (FARs). The regulations for TFRs are located in Part 91 and Part 99 which govern manned aircraft operations. For remote pilots, Part 107.47 requires them to comply with all the TFRs located in Part 91 and 99 as well.

How can I tell where a TFR is located?

If you go to The picture will tell you the dimensions while the text will tell you the precise dimensions, altitudes, and times. The dimensions of the TFR are going to be explained by reference to a fixed point. Much of the time, the fixed point is a VOR, but sometimes it can be a random set of coordinates on the map (especially when elected officials are campaigning or fundraising). It is incredibly important to check for TFRs before EVERY flight. You should not rely on a pre-flight briefer over at 1-800-wx-brief to catch the TFR or whether it affects you or not. 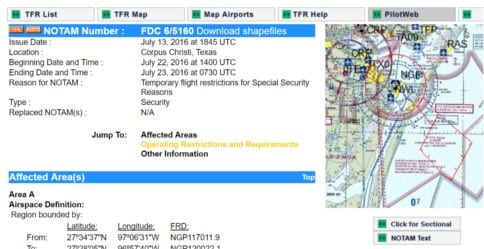 You should check tfr.faa.gov before EVERY flight. It breaks the TFRs down into states, chronologically on a list, graphically on a map, FAA ATC centers, and TFR types.

Pro Tip: Never trust the flight briefer. If you are close to a TFR, make sure you check.

If you are a drone flyer, you should check tfr.faa.gov, as well as the FAA’s drone specific TFR database housed on a different website.

The tfr.faa.gov website shows the TFRs that apply to manned and unmanned while the ARCGIS powered website shows ONLY the unmanned aircraft TFRS. You go to the drone specific website, type in the address of the location you are flying in the top left, and then see if that falls inside one of the bright red airspaces.

Why should you never rely on the briefer?

Sometimes people call 180WXBRIEF and get the briefer to do all the work in searching for TFRs, but you shouldn’t rely on them. President Obama came to Ft. Lauderdale when I was flight instructing and a TFR popped up. I called over to 1800WXBRIEF and requested a pre-flight briefing before the flight. The briefer told me about the TFR, but said that I was NOT within the TFR. I didn’t trust him so I checked online for the textual description and measured the TFR out. Guess what? I was right within the edge of the TFR and could not take off. The briefer got it wrong. When I was in the FBO, an airplane took off. In about a minute, the phone rang and the FBO manager answered. The manager talked shortly on the phone. He hung and up and turned to me and said, “That was the Secret Service trying to figure out who just took off.”

Who can go into a TFR?

TFRs are NOT always a complete ban on all types of flying. It just means only authorized individuals can fly in those areas. If you are interested in doing some commercial drone work around TFRs, you can contact me about getting those approvals and COAs.

Keep in mind that doing operations in a TFR can have benefits. One big benefit is for certain types of TFRs the airspace is segregated which means obtaining certain types of approvals could be easier.

How many different types of TFRs are there?

Next Page: What type of criminal punishment (prison time) or fines can happen if you fly into a TFR?