I have compiled the various drone lawsuits/litigation/prosecutions into the list below.

There has been a wide range of drone-related cases in the last couple of years ranging from flamethrowers mounted on drones to a drone crashing into a wedding guest.  I’m going to refer them collectively as drone lawsuits.

The drone lawsuits list below is broken up into Federal courts, Federal administrative courts (e.g. NTSB), and then state courts. Note that for criminal cases, I ONLY included cases where the prosecutor has chosen to file charges. There are many more individuals who have been arrested for flying a drone but the prosecutors for whatever reason did not choose to file charges. I did not include any drug transportation or prison-drop related prosecutions since those really aren’t drone cases but just drug or contraband cases.

Notice: I try to keep this drone lawsuits list up to date. This page MIGHT not be up to date with rulings. Think of this page more of a starting point to research further into the final outcomes.

Most of the criminal cases tend to be prosecuted under the state law equivalent of careless and reckless endangerment or something along those lines. The other batch of prosecutions has to do with violations of exporting technology associated with military drones.

DJI’s lawsuits involve them being on the receiving end of a class action or DJI being the plaintiff in a patent infringement lawsuit.

Then there is everything else. The civil drone lawsuits are all over the place (an Equal Protection Clause challenge against a state drone law, injured people suing drone flyers, products liability, breach of contract, etc.).

FAA and/or National Transportation Safety Board

From the U.S. Government Accountability Office May 2018 report, 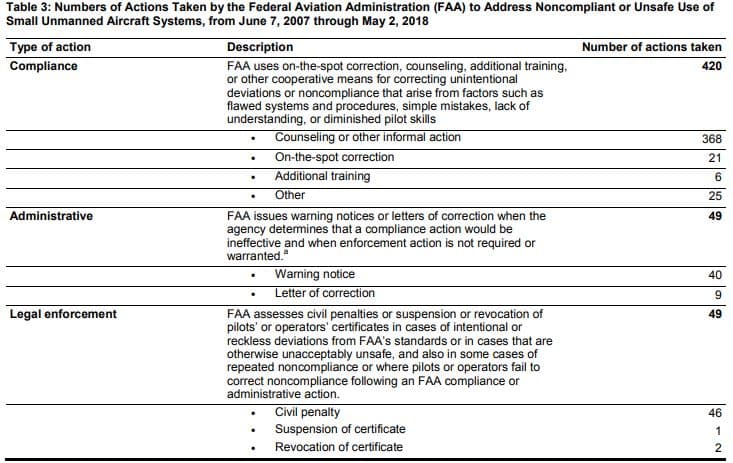 Other: (Because I don’t know anything else).

GoPro received a class action shareholder lawsuit. The lawsuit surrounds statements made by the CEO regarding their drone which was later canceled.  A second class action against GoPro was also filed.

FAA Enforcement Actions Prior to June 2016.

Keep in mind that Part 107 was not in effect at this time.

(June 11, 2016)  – Recently released documents from a FOIA request reveal a total of 23 FAA enforcement actions against drone operators. Here are the important take-aways I’ve found with the cases that have been released via Jason’s great work over at Motherboard.

Quick Summary (Explanations and Graphs Below)

Note: I’m not going to be citing directly to legal sources because I don’t want to educate my competition. Take a look at my drone attorney bio and you’ll see a graph of the drone law firms with the number of 333 exemptions they have filed. You’ll see that a really large majority of them don’t have much drone law experience. Remember, when hiring an attorney, don’t hire a poser, hire an attorney who is a commercial pilot.

If you want to use the graphs, I only require that you leave the watermark intact. :)

Not everything was released.  There are more enforcement actions that I know of than what was released. I won’t say anything else so as to not “inflame” their situations due to media attention.

None of the regulations that are exempted in a typical Section 333 (now called Section 44807) exemption were cited. This is a very important point. A 333 would provide a defense to those charges, provided the operator was following the exemption, but you have to remember, all the regulations apply. The 333 only exempts you from some of the regulations, not ALL. The 333 exemption isn’t your own little world to operate in. The Federal Aviation Regulations still apply. 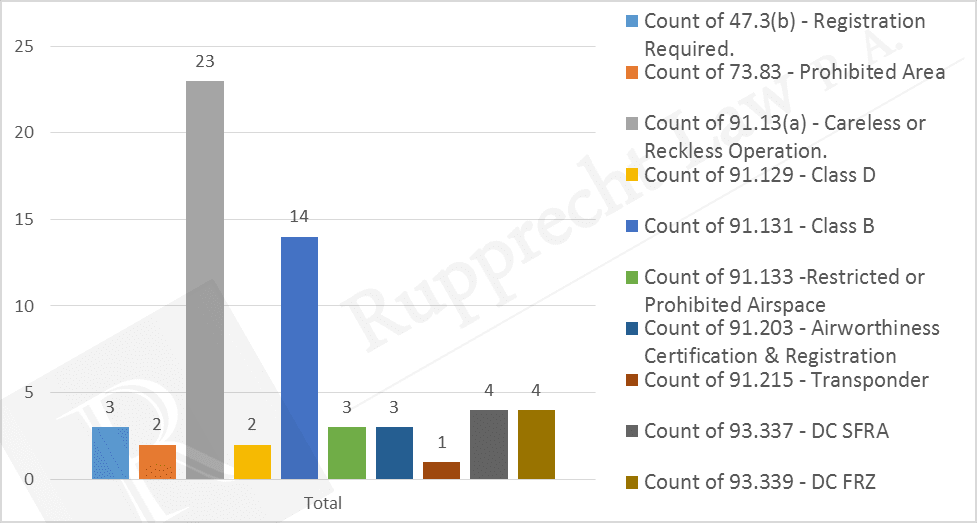 Compare with the regulations that are in an exemption:

What is the take away here? Everyone of the flights could have been cited with many more violations of the regulations. The FAA left a lot on the table with charges. So why would anyone get a 333? Because the 333 exemption would keep additional charges from the second list above “off the table,” provided you were operating under the 333. It would be beneficial as a partial defense.

Another take away is that the FAA treats 91.13(a) like bacon, they put it on everything to make it better.

None of the notices or orders say anything about 333 exemptions. This does give us a clue of the future dynamics when everyone has a 107 certificate. A 107 certificate being suspended or revoked would be bad when mostly everyone has one in the future. Remember that suspension actions, civil penalties, and revocations go on your record.

Two companies were targeted. Most individuals think the FAA is targeting individuals only but they have targeted at least two companies here. Without getting into the distinctions of how involved the drone operators were involved in the companies fined, this is one of the reasons why large companies hire 333 operators so they are not “on the hook” for the flight of the drone operator. What is interesting is the FAA didn’t go after the individuals operating the drones as well! However, SkyCamUSA, LLC managed to escape this but their pilot David Quinones, the “mistletoe” pilot from back in 2014 who cut a reporters nose, received a pilot license suspension of 90 days while the company was not fined separately. Future enforcement actions could see the 333 operator AND the pilot on the receiving end of enforcement actions.

One important thing to remember is that the attorney-client privilege applies to communications between an attorney and his client, not an attorney and a “consultant.” This is an important distinction because a prosecutor could subpoena the consultant to turn over documents or to testify as a witness in an enforcement action against you!

1 case started with a subpoena. There are three situations, at least that I know of, where subpoenas have been issued at the front end to go on fishing expeditions to figure out more evidence against the potential defendants. Skypan is the first example of this and the third instance is the Connecticut gun drone kid which is being fought out currently. The FAA might be switching up tactics to file a subpoena first and then use the evidence gathered as grounds for more violations. If they don’t “get” you on the civil penalty, they will at least get you to spend time and money on an attorney fighting the subpoena.

151 days is the average from the date of the first violation to a notice from the FAA. 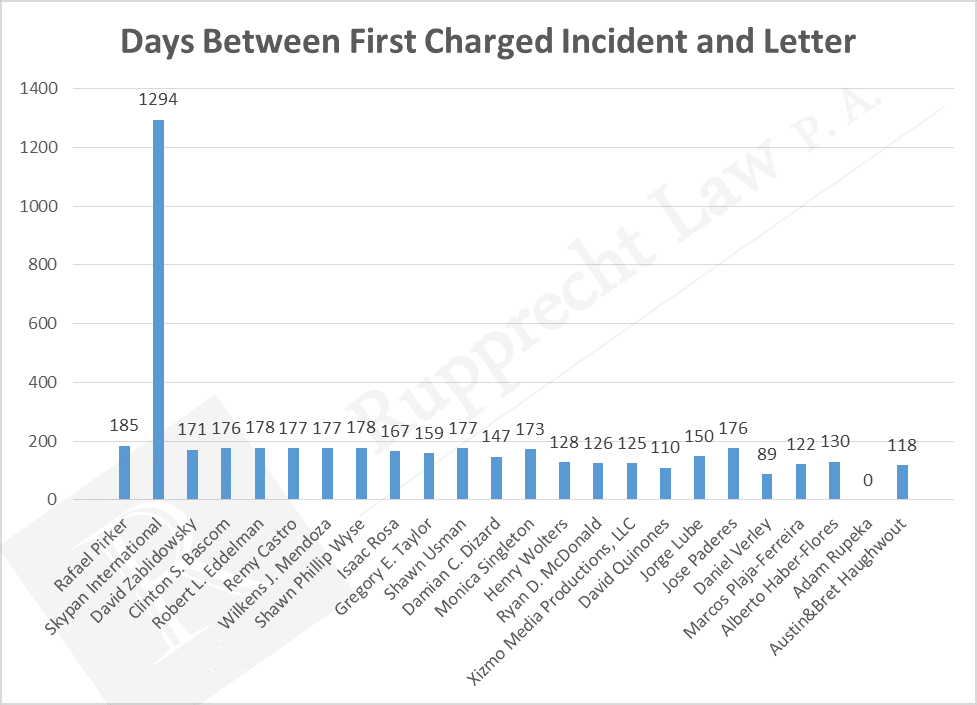 Note: Adam Rupeka’s says “0” because the scan of the document was so bad I could not determine the letter date.

Phantoms were the most used aircraft.  Yes, you guessed it. The majority of the aircraft involved in these enforcement actions were Phantoms. I just lumped them all into one category as opposed to breaking down into different models of the Phantom. The Phantom is starting to be like the AK-47 of the drone world. 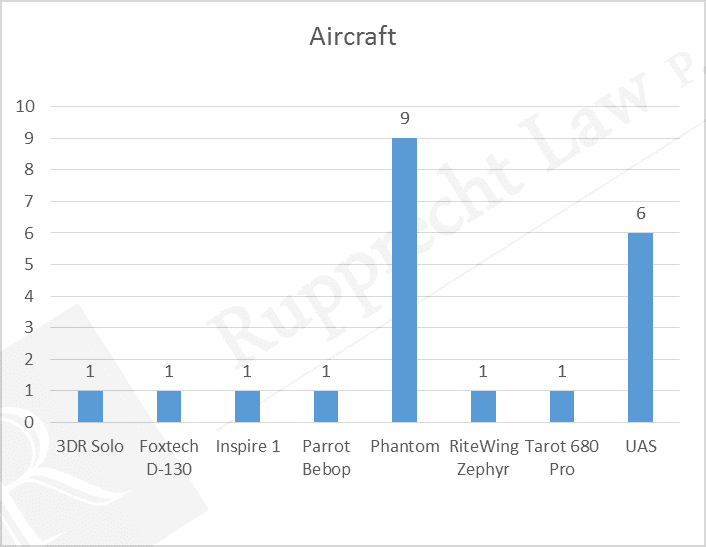 Many of the flights occurred in Class B Airspace. Class B airports tend to be in major cities. The radius for Class B airspace extends 5 nautical miles out (10 NM diameter) and in some instances even more. Here is a graph of all the types of airspace that the defendants flew in. Notice that a defendant can fly in different types of airspace for one flight. 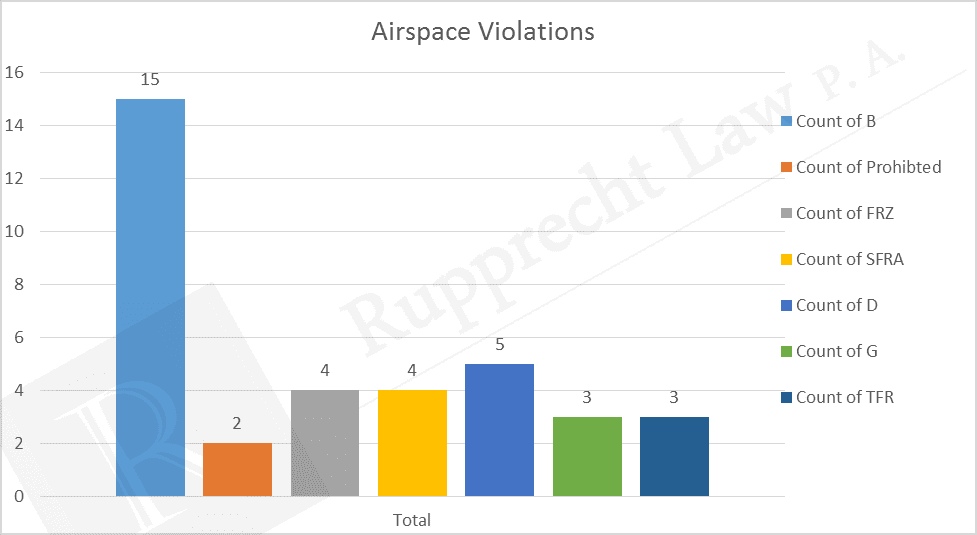 The FAA enforcements appear to be spread out chronologically but not geographically. Some of the notices appear to have been filed around the same date. Maybe the prosecutor “batched” them on the side of their desk. 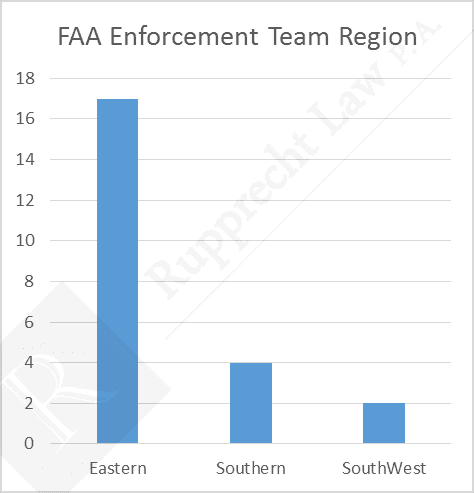 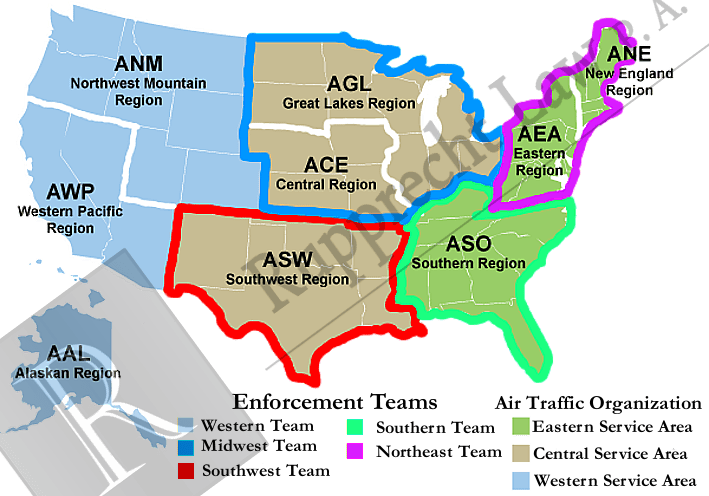 4 of the flights were commercial.  The FAA is not targeting only recreational flyers but also commercial.

5 of the notices or orders mentioned the loss of line of sight in the facts justifying a violation of the prohibition on careless and reckless flying. This is an important distinction because Section 336(b) is the FAA’s good old fallback position in enforcements. FPV racers take note. The FAA explained its view in the 2014 Model Aircraft Interpretation and said that FPV racing is not compliant with Section 336’s definition of model aircraft requiring line of sight and therefore would not be protected. 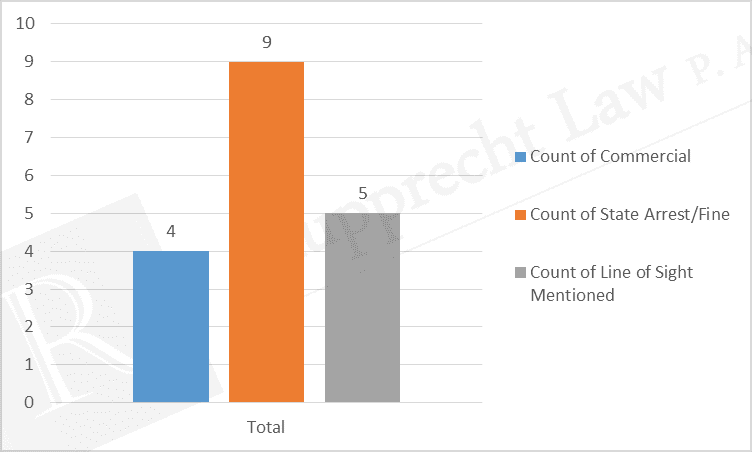 9 of the cases also had some type of arrest or fine under state or local law for the flight. You can be prosecuted under state/local law as well as federal law at the same time for the same flight. Also, keep in mind that a 333/COA is helpful for getting local law enforcement off your back as they are generally trying to find operators who do not have 333s. A good example of this is with the City of LA’s ordinance. Law enforcement officers were going around asking people if they had a 333 or not. If you didn’t have one, you could be arrested.

The FAA did NOT charge the defendants with all the regulations that were possible. I went through the facts and noticed a lot of regulation violations. Each flight should have been a $5,500 fine at a minimum. Why? With a typical drone operator, at least 5 regulations are usually being violated in each flight. If the operator switched out batteries, that would be a 2x multiplier because they are violating each of those 5 a second time on the second flight. A two battery job could compile a fine of around $11,000 if a prosecutor really wanted to go after you. It appears that the FAA’s prosecutors were either disorganized as to how to fully prosecute these cases or they were too embarrassed to “throw the book” at the drone operator. As time goes on, I believe the prosecutors will get better at their game and there will be more and more pressure to vigorously prosecute violators. I asked my friend Craig Thompson, a Dallas Aerial Photographer, what he thought of this data and he said, “Given that more than a million drones have been sold in the U.S., the fact that only two dozen fines have been levied is surprising and likely reflects the FAA’s lack of resources, rather than a lack of desire.” I think his statement is correct. As time goes on, we can expect to see many more of these enforcement actions to be more fully prosecuted.

Potential Benefits to the Drone Community.  The FAA’s lack of enforcement has been the catalyst for many states, counties, cities, and towns enacting some laws governing drones. The release of this information can have a positive effect by
showing that the FAA IS doing something. I would suggest giving this article out to any of your elected officials who plan on doing something regarding regulating drones. Tell them to give the FAA time to get “up to speed” on the situation before they pass any laws that will stifle this industry.

Drone Prosecutions in Other Countries

Cocked Kiwi Downs Drone: a Case Note from our Cousins across the Ditch